The best kitesurfing spots to the east of Fortaleza
;

although still pretty much undiscovered, are neighbouring spots east of Fortaleza that all offer very similar characteristics to the famous kiteboarding destinations like Cumbuco and Paracuru which have had their names on the world kite map for some time now.

It is in these “new” spots where you’ll find all types of conditions; waves, flat water, lagoons, river mouths etc… but most importantly all of which guarantee all the space you can dream of. The natural beauty here is outstanding and makes one feel as though they are kitesurfing in a deserted wonderland. 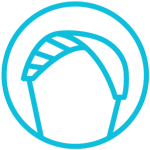 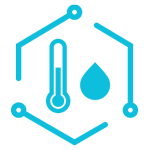 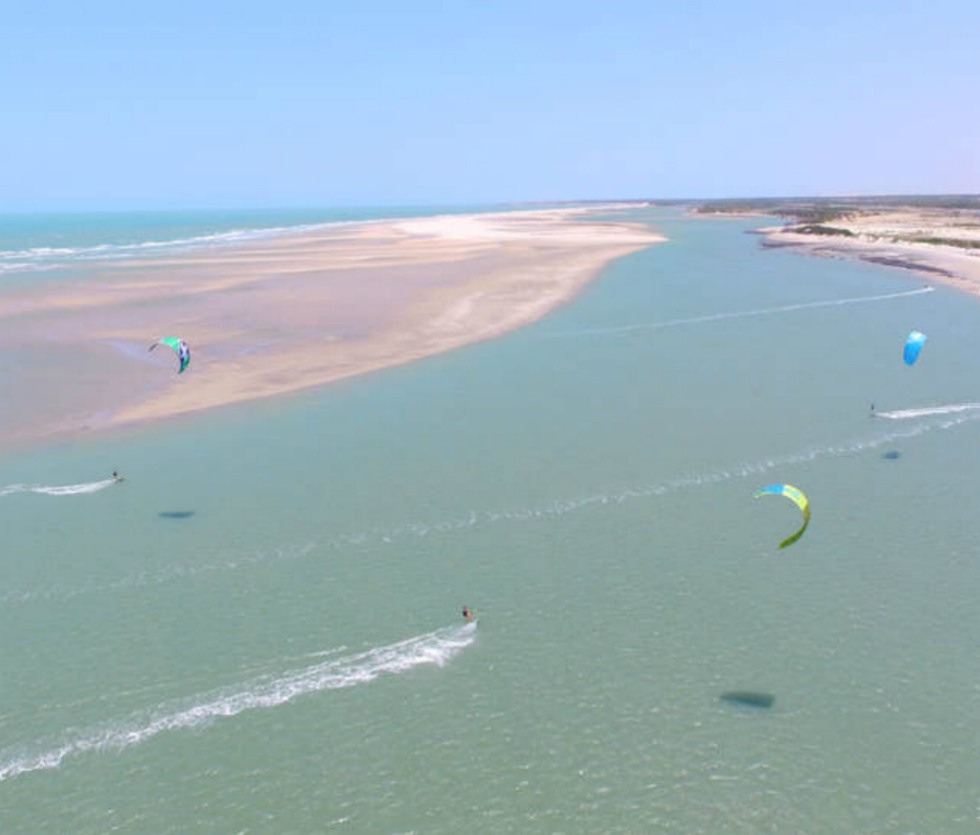 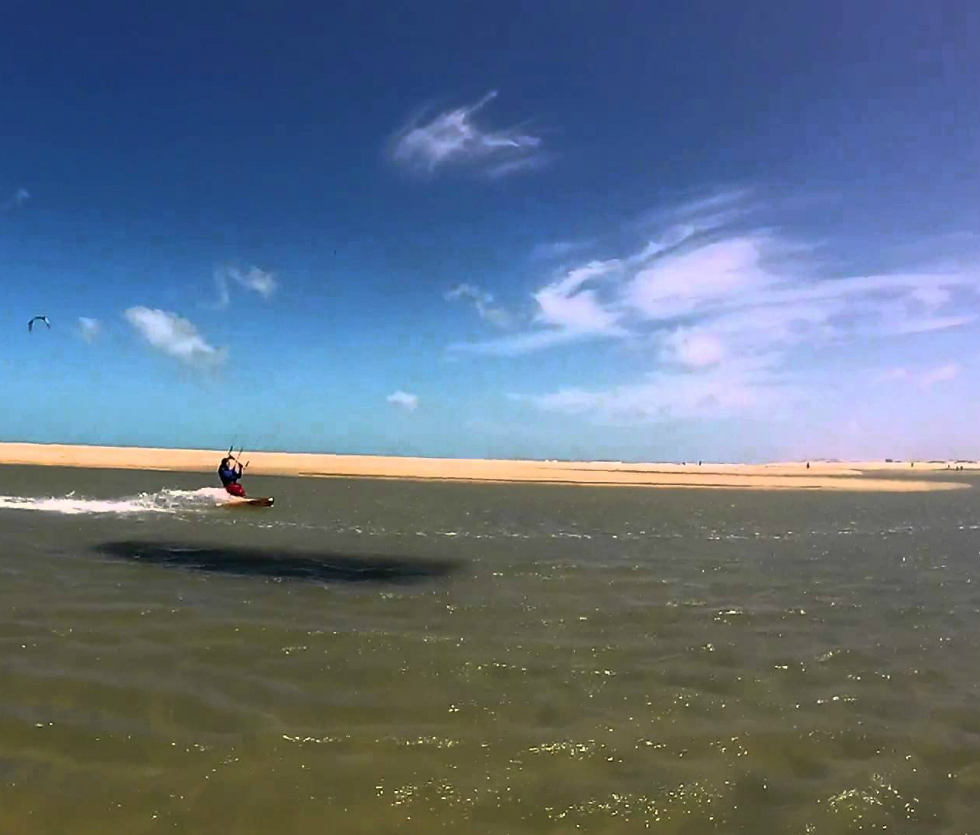 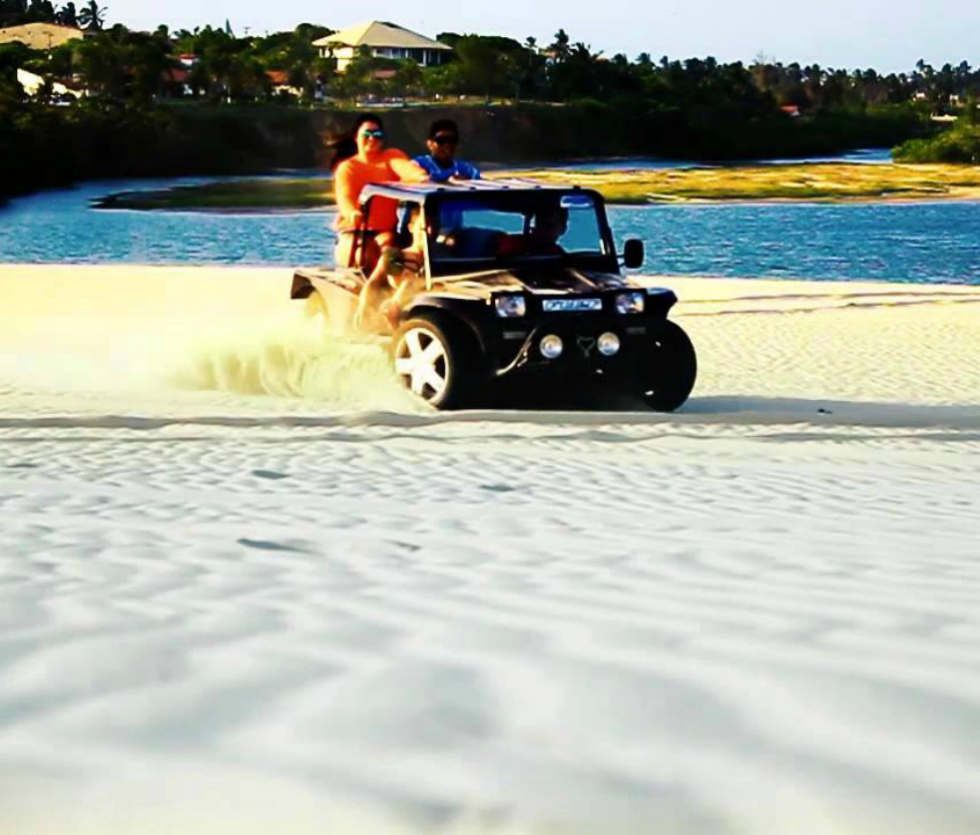 Spot characteristics
Parajuru: This is the most southeastern spot of the four. A heavenly stretch of white sand with surrounding dunes and sand banks dotted in the sea which on high tide form a magnificent selection of lagoons with flat, shallow water for you to choose from, perfect for freestylers and beginners alike.

Slightly further out at sea there is a wave spot which gradually grows as the tide rises.

A little further southeast of Parajuru is the river mouth of Rio Piranji which similarly offers perfect flat water conditions.

Uruaú: In this spot there are two lagoons; one right in front of the sea which rises and falls with the tide and also fairly small only allowing room for about 4-5 kites. The other is 2 km further out and its size depends partly on the rainfall in rainy season.

Finally in Uruaú, during low tide in the open sea the water is semi-flat with some waves only a few metres from the shore and when tide rises the waves just get bigger and bigger – perfect for wave ride.

Barra Nova: This is the spot where you will find just as many lagoons as you would in the previous spots mentioned as you would out in the open sea. At the river mouth of the Rio Choro, the high tide forms superb, flat water lagoons, and when the tide drops its best to go further out to sea where you’ll find awesome waves to play around with.

Another 10km northeast of Agua Belas, where the river mouth of the Rio Mal Cozinhado there is a lagoon and just on the other side of this lagoon you’ll reach another fun wave spot.

Iguapé: This spot, only 35km from Fortaleza, is well known for its massive dune and a hill that runs into the sea creating waves of up to 2m with flat waters in-between. These conditions cannot be topped when it comes down to riding waves and big airs.

The wind in this area east of Fortaleza blows less strongly than in areas of the east, nevertheless it is still constant from August to February with 16-25 knots. At the end of this coast the wind is side shore – side on shore.

The temperature here is like the rest of the region and ranges between 28˚C y 38˚C.

Thanks to the strict environmental law enforcements in the area, all of the coast that lies east of Fortaleza is kept well intact with good restaurants and posadas and locals are encouraged to promote unobtrusive activities like horse riding, boat rides up the river along with yoga and meditation workshops. 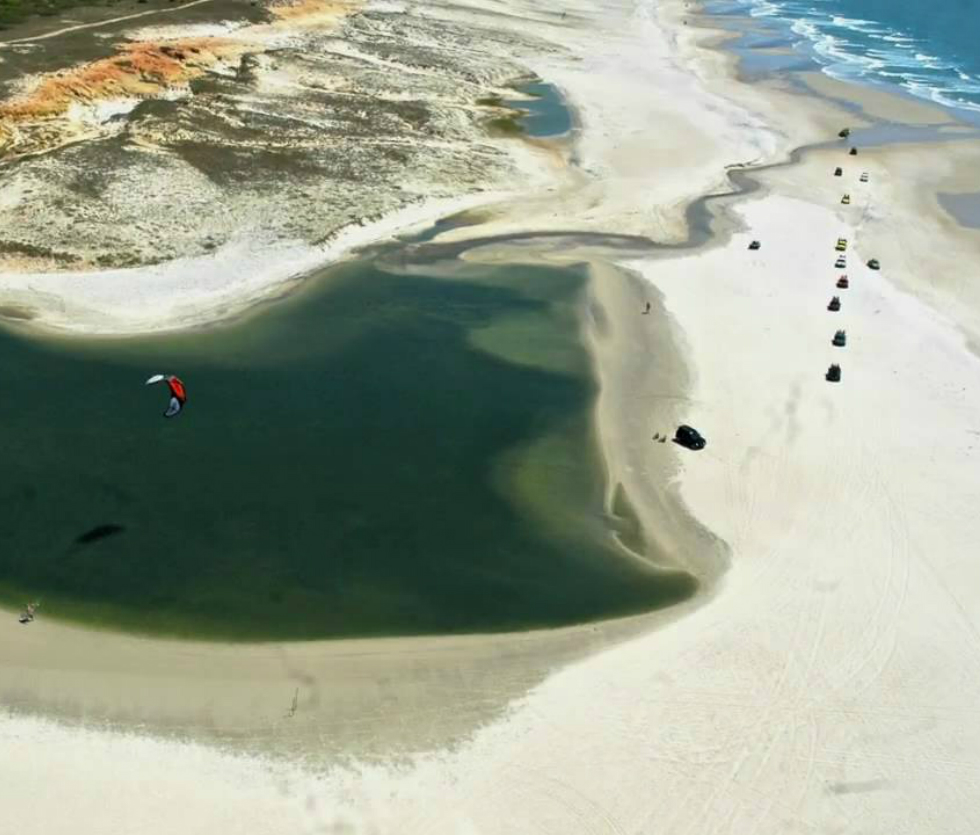 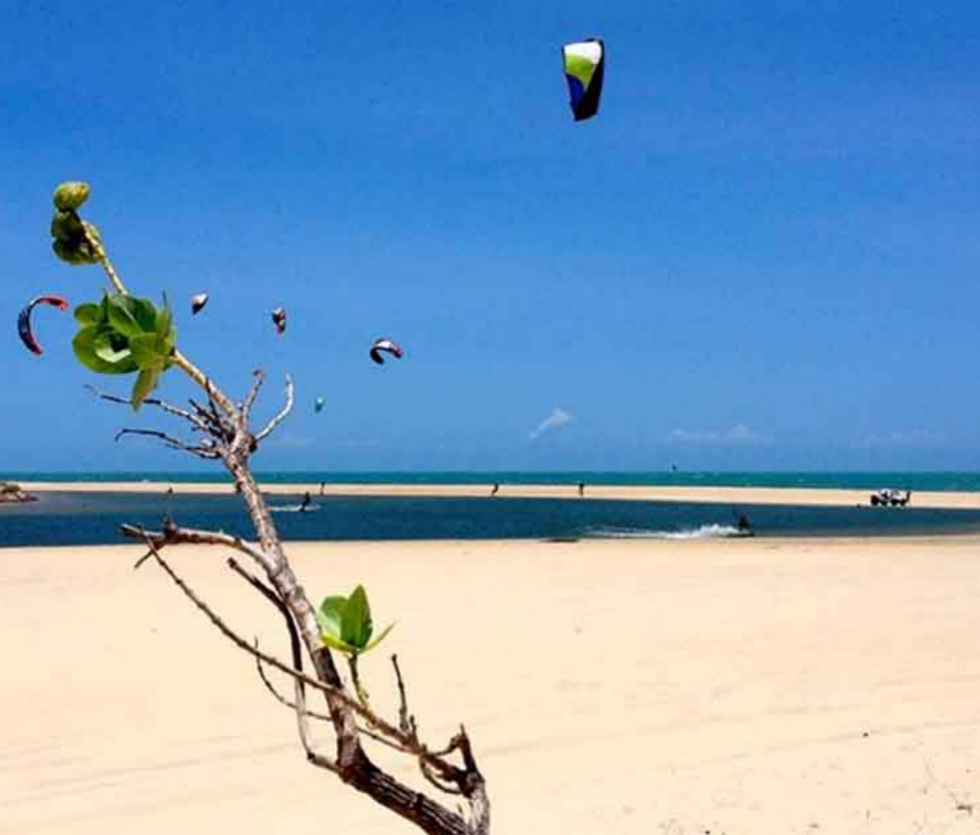 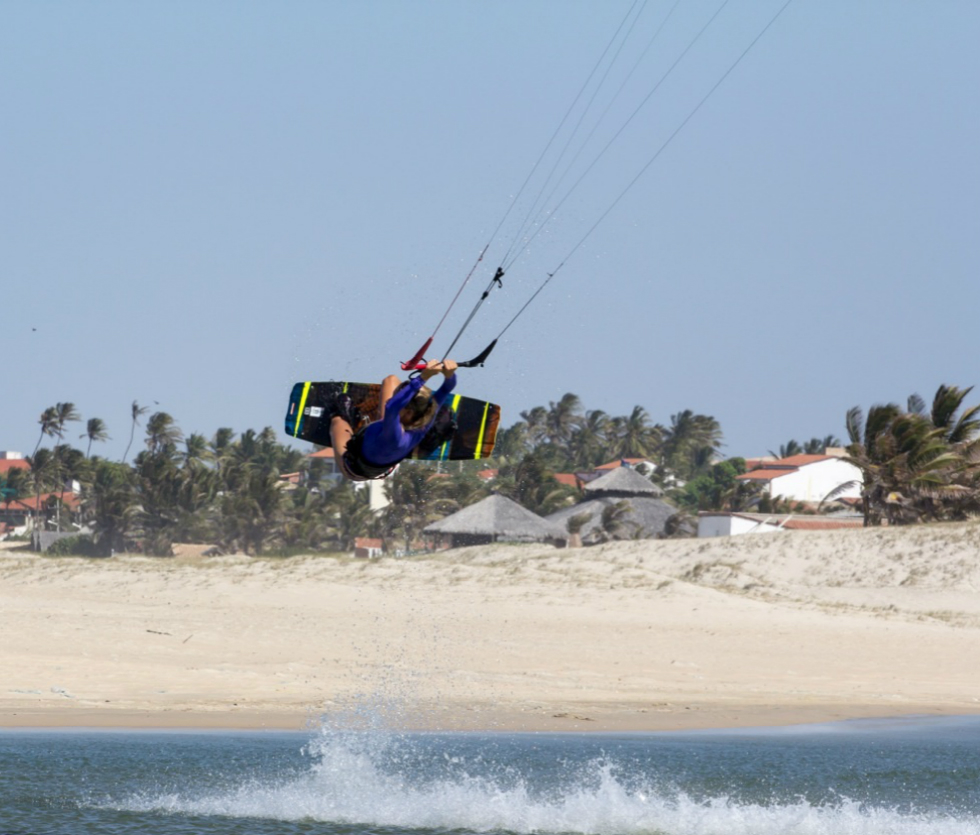 Downwinds passing by spots in the East of Fortaleza

Discover the Kite Safaris that cross the East of Fortaleza. Discover Parajurú, Barra Nova or Uruaú by kite, it’ll be the best kitesurfing adventure of your life.

Learn more about our Kite Safaris

Kitesurfing trips to spots in the East of Fortaleza

Whether you are wanting to head straight to Parajurú, Barra Nova or Uruaú or whether it is just one more of your destination, we will organise it.

An untouched beach where you’ll be one in a handful of kites out at sea. 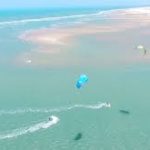 One of the best spots around in the east of Fortaleza. 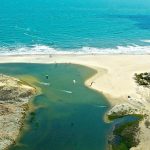 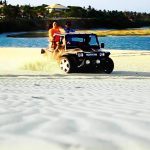 A flat water spot right next to a super wave spot. 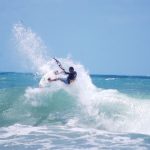 A spot with the right combination of waves and flat water.

Requirements to enter the country

To enter the country you will need a valid passport for at least six months from the date of entry. You will be permitted a tourist visa valid for up to 90 days which is obtained at the airport of your arrival. During the flight you will be handed an Arrival Card; a piece of paper that you receive upon arrival that must be filled in, authorizing your stay for a certain period. You must keep this document with you during your stay in Brazil as it must be handed in at customs on the day of your departure.

We advise you to contact the embassy of or consulate of your home country should you be in doubt about the requirements necessary to enter Brazil.

The Brazilian currency is called Brazilian Real (R$) and we advise you to check the exchange rates when exchanging your money.

This region east of Fortaleza has not really been exploited by international tourism and so you’ll be sure to find authentic local cuisine, with the fresh seasonal ingredients and well served. Grilled lobster or fish are their top dishes. The fruit is always plentiful and sweet and breakfasts buffets always very generous.

Every pousada that we work with offers a high speed wifi connection. The plugs have a two pin and fit into a type N socket (same as plugs used in most of Europe).

In this region of the northeast of Brazil one does not need to be vaccinated, but we would advise you to consult your doctor to inform yourself about vaccinations should you decide to visit other parts of Brazil during your stay.

At the same time we advise you to bring a small First Aid Kit for convenience as it can be very difficult to find medicine especially in the more rural locations. 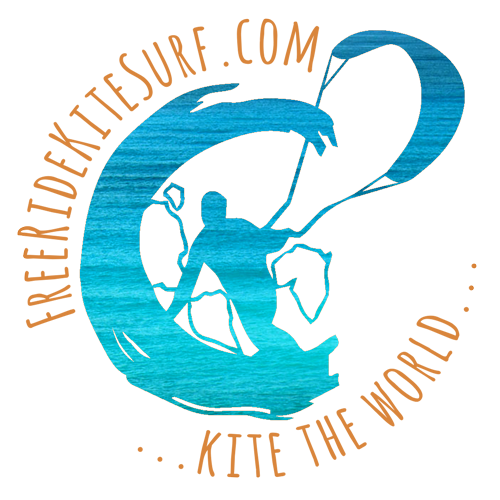 Are you already thinking about your next kitesurf adventure?

Send us your email and we'll keep you in the loop of the destinations that can be part of your next kitesurf trip.

Thank you for suscribing to our newsletter!

Don't worry, we won't spam you!